One of the challenges every development team faces is managing a consistent local environment to work in. Tools like Vagrant have made this easier in the past but working with heavy VM’s can be time consuming and quite taxing on your computer’s resources. Laravel is a great PHP framework for building web applications and provides some officially supported solutions for this as well with Homestead and Valet. But what if you want tighter control over your local environment without the burden of managing VMs?

That’s where Docker comes in! Docker provides a way to build and run lightweight containers for any service you would need. Need to make a change to PHP-FPM configuration? Want to change which version of PHP you’re using?

With Docker you can destroy your entire environment, reconfigure, and spin it back up in a matter of seconds.

tldr; If you just want to see the code check out github.com/kyleferguson/laravel-with-docker-example for a base Laravel install setup with Docker. See the gif at the end for an example of how quickly you can destroy and rebuild the entire environment :)

Because Laravel integrates with many other technologies (MySQL, Redis, Memcached, etc.) it can be a little tricky to get configured just right when you start out. My goal with this post is to provide a high level (but usable) understanding of running apps with Docker.

For the purposes of this post any Laravel or Lumen installation will work. If you already have an app, you can follow along using that. Here we’ll use the Laravel Installer to setup a quick new app.

Docker now runs natively for Mac, Windows, and Linux. Click on the platform of your choice to install Docker on your machine. This should install Docker, as well as Docker Compose which we will use.

After installing you should be able run commands with docker

If docker ps returns an error, make sure that the Docker daemon is running. You may need to open Docker and start it manually.

Now the fun part :) If you’ve setup a PHP environment before you’re probably familiar with running a web server (such as Nginx or Apache) next to PHP. With Docker, we create containers that ideally are dedicated to just one thing. So for our setup, we will have one container that runs Nginx to handle web requests, and another container that runs PHP-FPM to handle application requests. The concept of splitting these apart might seem foreign, but it allows for some of the flexibility that Docker is known for.

Here’s a high level overview of what we’ll be creating.

We’ll use Docker Compose to make creating the environment consistent and easy so we don’t have to manually create the containers each time. In the root of the project, add a file named docker-compose.yml

You can find information about all of the options for Docker Compose here if you’d like to dig in more.

Now we need to create those Dockerfiles mentioned above. A Dockerfile is just a set of instructions on how to build an image. It’s sort of like provisioning if you’ve ever setup a server before, except we can leverage base images that make configuration/provisioning very minimal. The standard convention is to name the file Dockerfile, but because we have multiple containers I like to follow the convention of [service].docker. Create two files in the root of the project

In the app dockerfile we set the base image to be the official php image on Docker Hub. We can already see one of the amazing things about Docker here. If you want to use another version of PHP, you can just change which base image we use: FROM php:5.6-fpm for example. We then run a couple shell commands to install mcrypt extension (which Laravel depends on currently) and MySQL client which we will use for our database later.

The web container just extends the official nginx image and adds an Nginx configuration file vhost.conf to /etc/nginx/conf.d on the container . We need to create that file now.

This is a pretty standard Nginx configuration that will handle requests and proxy traffic to our PHP container (through the name app on port 9000). Remember from earlier, we named our service app in the Docker Compose file and linked it on the web container, so here we can just reference that name and Docker will know to route traffic to that app container. Neat!

We should be all good to go now. From the root of the project run

This tells Docker to start the containers in the background. The first time you run it might take a few minutes to download the two base images, after that it will be much faster. We should now be able to visit our app at http://localhost:8080

Note: it’s possible that Docker isn’t using localhost (like on Windows sometimes). In that case, you can run docker-machine ip default to get the IP address to use instead 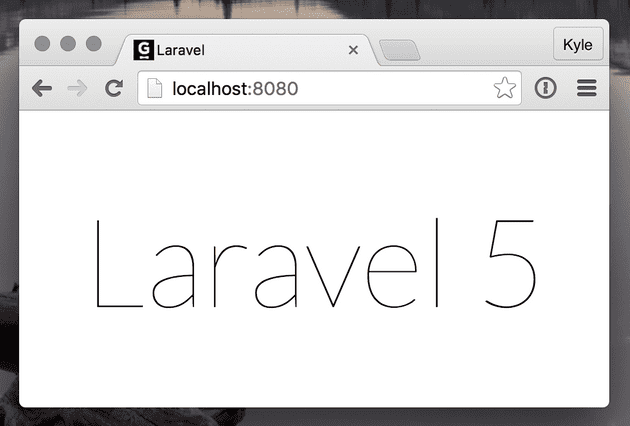 Hooray! Heres some common commands you might run to interact with the containers:

That last command is similar to opening SSH into a VM. You can get the name of a container from docker ps and then use the exec command to “open an interactive bash session” on the container.

We added the pdo_mysql extension to our container above, so now we just need a MySQL database. Docker to the rescue! We don’t need a Dockerfile for this one, since we don’t need to modify the base image we’re going to use. Go back to the docker-compose.yml. We need to configure the database service, and then link the app container so they can communicate:

Now in our .env file for Laravel we’ll configure the connection details.

It may sound confusing, but the key point here is our database container is listening on port 3306 inside the containers, and port 33061 on our local machine (outside the containers), so we have to configure the two connections this way in order for it to work everywhere.

Stop and start the containers to add our new database service:

You can make sure the mysql container is running with

Now, you should be able to run migrations (which Laravel ships with by default) to setup the database.

Note: if the container looks like its running and this command fails, it might just be because mysql hasn’t finished setting up yet. Give it a few seconds and try again. You check the logs for the container by running $ docker logs [NAME]

To make sure it’s working inside the container, we can add a quick test route using some defaults Laravel has setup:

Every time we hit this endpoint we should see a new user get added. 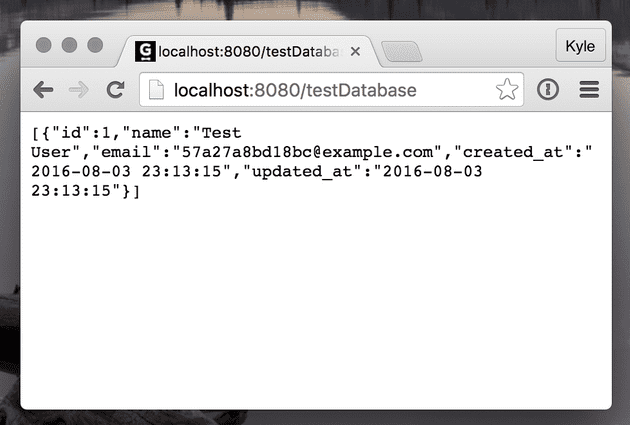 All the things with Docker

At this point, most of the things you need should be running. But just to show one more example, let’s add Redis as the cache provider. Like we’ve seen before, we just need to spin up a new Redis container and hook it up.

Don’t forget to install the predis/predis package for Laravel :)

Add the service to docker-compose.yml

Only changes we made were

Since our app container has the connection information stored in its environment, we can point our .env file config at the container from the perspective of our local machine.

A quick route to test: 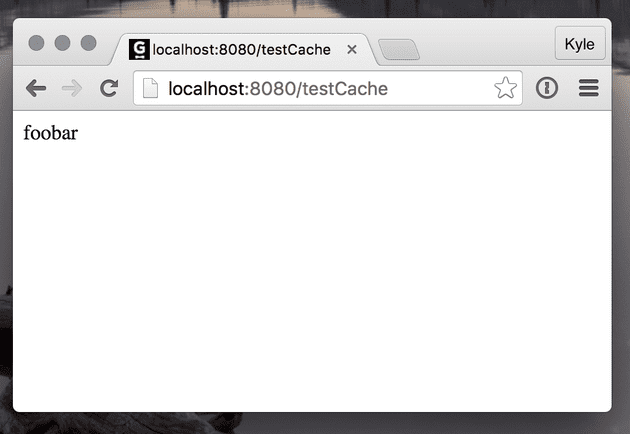 We can use artisan tinker to make sure it’s setup correctly on our local machine:

Just for fun, you can destroy (not stop, destroy) the entire environment and spin it back up all in a matter of seconds :) This is due to how Docker uses layers to provide mas rapido happiness. (I think that’s the official feature name).

Play around with it, change PHP versions, configurations, or most importantly: build an awesome app! Now you have a flexible but consistent development environment that can be used amongst you and your team.